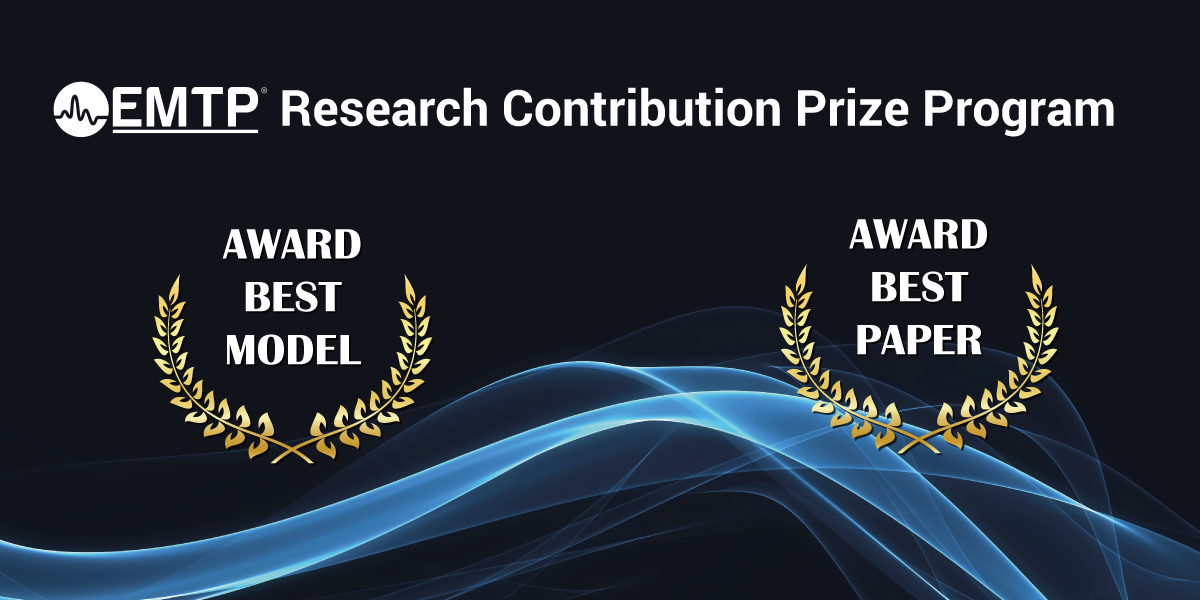 
The EMTP® team is pleased to announce the winners of the EMTP® Research Contribution Prize program which took place during the 2021 year.

The aim of the award is to recognize student contributions to the technology associated with power system transients. There is no restriction in the field of applications. The two competition categories are: the best accepted IEEE, IET, PSCC, EPSR or IPST journal or conference paper on EMT simulations; and the best EMTP® model developed.
We would like to congratulate our two winners of this year's edition:

A real contribution to our industry!

Much more than the $1000 in prize money, our two winners are making a real contribution to the field of power system simulation. Summing up, the judges said:

The scientific content of your paper and model are very original and an important and timely contribution to our industry!

All the papers and models received were of a high quality and we would like to congratulate all the participants for their excellent work. Their production makes them completely part of the EMTP® community and we wish our winners and all participants, all the best for the rest of their career.

Learn more about the winners

Husam Samkari - Ph.D. and P.E. in Electrical Engineering
Dr. Husam Samkari is with the University of Tabuk in Saudi Arabia. He is a licensed professional engineer (P.E.) at the California Board for Professional Engineers, Land Surveyors, and Geologists in the United States of America and a licensed P.E. at the Saudi Council of Engineers.
Dr. Samkari received his Ph.D. and M.S. degrees in electrical engineering from the University of Idaho, the United States of America, in 2021 and 2016. He received his B.S. degree in electrical engineering from Umm al-Qura University, Saudi Arabia, in 2010. He was awarded an academic certificate from the University of Idaho in Power Systems Protection and Relay in 2015. Dr. Samkari worked as a distribution engineer at Saudi Electricity Company. Also, he worked as a teaching assistant at the University of Idaho and as an engineering intern at Schweitzer Engineering Laboratories, Inc. in the United States of America.
Dr. Samkari is an IEEE and PES member and served as the Vice-Chair of the IEEE Palouse Section and the Chair of the IEEE Palouse Young Professionals for four years. His research interests are inverter-based resources (IBR), time-domain protection, microgrid systems, and control schemes with aggregated electronically coupled distributed energy resources.

Rafael de Jesús Castillo Sierra - Electrical Engineer, Ph.D. Student.
Rafael is an electrical engineer (Colombia, 2012) with a master's degree in electrical engineering (Colombia, 2015) from Universidad del Norte. He has experience as a professor at the Universidad del Norte since 2012, starting as a teaching assistant in charge of the Circuit Theory Laboratories. Subsequently, since 2014, he has worked as a full-time professor leading the courses of Electrical Machines, Circuit Theory and Power Systems Analysis.
In consulting and design work, in 2016, he participated as a low-voltage network designer in two construction projects. In research, he has worked mainly in projects related to the insertion of renewable energies into distribution and low voltage systems. However, in his master's work he worked on a topic related to the maintenance of high-voltage electrical substations. In new knowledge divulgation, he has published a dozen articles in ISI/SCOPUS indexed journals.
In 2019, he was awarded the Fulbright Scholarship to carry out his doctoral studies in the United States. He is currently pursuing a Doctorate in Electrical Engineering at the University of Wisconsin Madison, at the “Wisconsin Electric Machines and Power Electronics Consortium” (WEMPEC). There, he carries out research in the area of application of power electronics in power systems, specifically he is studying the application of the Modular Multilevel Matrix Converter (AC/AC Converter) as a way to improve controllability in transmission lines.

Special thumbs up goes out to Babak Ahmadzadeh, who provided a very advanced, complete and impressive work, which requires knowledge in many fields of electrical engineering, that we decided to welcome him as a new EMTP® Ambassador to our cherished community. Babak Ahmadzadeh received the M.Sc. degree in electrical engineering from Isfahan University of Technology, Isfahan, Iran, in 2013. He is currently working toward the Ph.D. degree with the Department of Electrical Engineering and Computer Science, York University, Toronto, ON, Canada.

Register for the 2022 edition

The EMTP Alliance was formed in 2018 between PGSTech and Powersys. The aim of the EMTP Alliance is to develop, market, commercialize EMTP® worldwide as well as to provide technical support and offer consulting services to EMTP® users. Learn more about EMTP® history.